As noted in the previous post to add a database to HammerDB you will need to change the source code.  There are different ways to do this, however the recommended way is as follows.  Firstly make a fork of the latest HammerDB source on GitHub to your account. To do this select fork in the top right hand corner of the GitHub page and follow the instructions. Shortly you should have your own copy of HammerDB under your account showing that it was forked from the main site.

Next you will want a development copy on your own system. This can be done with Clone or download.  in this example we will use the command line to do this using the web URL shown in the Clone or download link. 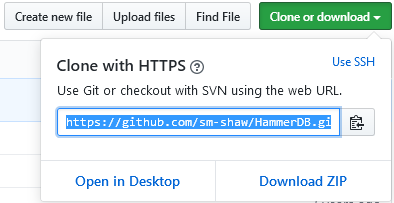 For this example with a development system on Linux we will make a directory to show that we are working in a fork of HammerDB.

Then in this directory clone using the URL above.

Under the working directory we know have the HammerDB source code in which to add the new database.

The git remote command will show the remote repositories.

So just for interest let’s try and run HammerDB from the source to see what happens.

So HammerDB started as I already had TCL installed on my system but then failed to find a package it needed.  As identified in the previous post we don’t have the correct bin and lib directory so need to download the binaries version from here.  Install these alongside your source directory.  In the newly installed binaries directory you will notice that there are the bin and lib directories we need and that HammerDB will run in this directory.

As the source directory will be updated from time to time from the upstream remote and the bin and lib directories are different for both Linux and Windows it is best to make your changes to the source and copy these to binary build for testing as you do not want to commit any of the binary files into the source.

Now we have a copy of HammerDB that we can make changes to, to add a new database. In the next post – we will show adding MariaDB as a separate database into HammerDB.  As a fork of MySQL this has the advantage that at least initially we can use the already provided mysqltcl3.052 interface.